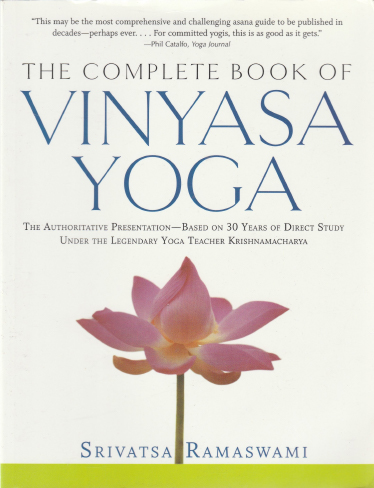 The Complete Book of Vinyasa Yoga

About The Complete Book of Vinyasa Yoga

Sri T. Krishnamacharya (1888–1989) was the most influential figure in the last 100 years in the field of yoga. Many of today's best-known yoga teachers—including his brother-in-law B. K. S. Iyengar, his son T. K. V. Desikachar, and Pattabhi Jois, founder of Ashtanga yoga—studied with him and modeled their own yoga styles after his practice and teaching. Yet, despite his renowned status, Krishnamacharya's wisdom has never before been made completely available, just as he taught it. Now, in The Complete Book of Vinyasa Yoga, Srivatsa Ramaswami—Krishnamacharya's longest-standing student outside his own family—presents his master's teachings of yogasanas in unprecedented detail. Drawing upon his 33 years of direct study, beginning in 1955 and continuing nearly until his teacher's death, Ramaswami presents more than nine hundred poses and variations in logically structured sequences, precisely describing Krishnamacharya's complete Vinyasakrama system. Along with every movement of each yoga posture, he covers the proper breathing techniques for each pose—something no other book also derived from Krishnamacharya's teaching does. Nearly 1,000 full-color photographs are featured in this authoritative landmark presentation of the study practiced by the "grandfather of modern yoga."

Having studied for more than three decades with renowned yoga master T. Krishnamacharya, and taught for more than two decades, Ramaswami attempts to offer a more complete picture of the practices developed ages ago to heal the body, train the mind and cultivate inner peace. He calls much of Western yoga practice "blatantly aggressive" and altered to appeal to Western tastes, omitting such essential aspects as yoga philosophy, breathing techniques, correct sequencing, chanting and meditation. In his descriptions of more than 900 poses and variations, he guides students on ways to integrate these aspects. While Ramaswami says his book can be used by students of every level (the sequences are rated according to difficulty), some may feel intimidated by the photographs, which show highly advanced yogis in many positions that are rarely taught in the average group class. The author's approach is somewhat didactic, emphasizing the "correct" way to do the poses, without acknowledging differences in body type and structure. The book's format makes it more of a practice manual, and most likely readers without much background will need to read Ramaswami's Yoga for the Three Stages of Life to put the instruction into a larger context.

Vinyasa Krama yoga is an ancient practice of physical and spiritu­al development. It is a systematic method to study, practice, teach, and adapt yoga. This vinyasa krama (movement and sequence methodology) approach to yogasana (yoga posture) practice is unique in all of yoga. By inte­grating the functions of mind, body, and breath in the same time frame, a prac­titioner will experience the real joy of yoga practice. Each of the important pos­tures (asanas) is practiced with many elaborate vinyasas (variations and move­ments). Each variation is linked to the next one by a succession of specific tran­sitional movements, synchronized with the breath. The mind closely follows the slow, smooth, deliberate ttjjayi yogic breathing; and the yoking of mind and body takes place with the breath acting as the harness.

Srivatsa Ramaswami (born 1939) is a teacher of Vinyasa Krama yoga. He studied for 33 years under the "grandfather of modern yoga", Krishnamacharya. In India he teaches at Kalakshetra. He has run workshops in America at the Esalen Institute, the Himalayan Institute and many other centres. He is the author of four books on yoga.