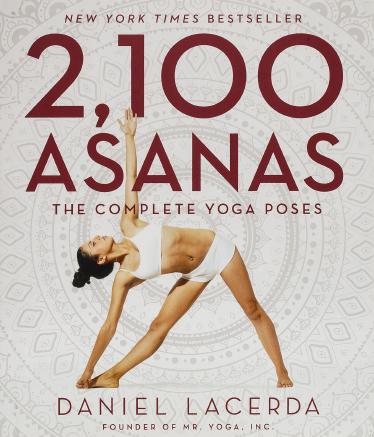 About 2,100 Asanas: The Complete Yoga Poses

The most complete collection of yoga asanas ever photographed, and the first-ever to categorize an astonishing 2,100 yoga poses. This beautifully designed book is a must-have for yogis of all levels and every practice.

2,100 Asanas is an unprecedented, meticulously crafted catalog of yoga poses and modifications. It is also a gorgeous work of art, showcasing the beauty and athleticism of the human form. Each photograph features an expert yogi performing the pose to perfection. The aesthetic is clean and modern. The book is organized into eight major types of poses-standing, seated, core, quadruped, backbends, inversions, prone, and supine-and further broken down by families of poses that progress from easiest to more challenging. Every pose is accompanied by the name of the pose in English and Sanskrit, a description of the modification, the Drishti point (eye gaze), the chakras affected and its benefits.

Most of us know yoga as a set of poses performed in a gym or yoga studio setting. The majority of yoga styles practiced today were invented in the last quarter of the 20th century and are either a far cry from yoga's roots or have no authentic lineage.

If we really want to examine the roots of yoga, we need to go back to the Harrapan culture, dating back 3,500 years, when yoga was a meditative practice. According to some, around 1500 BCE, Harrapan culture was diminished due to Aryan invasion. Barbarians from Normandy introduced the caste system and enforced a set of religious rituals that involved blood sacrifice practices. Along with these religious practices came sacred scriptures called the Vedas, a large body of spiritual texts originating in India. The word "yoga" was first mentioned in the oldest of the Vedas, Rig Veda. It referred to the concept of discipline.

Around the 4th century CE, Tantra Yoga emerged. This new form of yoga celebrated the physical body as a vehicle to enlightenment. The philosophy behind Tantra Yoga can be summarized by the idea of uniting all the dualities within a human body (e.g., male and female; good and evil), which gave Tantra a very sexual reputation. This is, however, a common misunderstanding, since Tantra practices extend far beyond sexuality.

Hatha Yoga was introduced in the 10th century CE. It combined the physicality and conscious intent of using bodily postures, or asana practice, and pranayama breath control for the goal of self-realization.

Daniel Lacerda, also known as Mr. Yoga, is a New York Times best selling author. He is the founder of Mr. Yoga, Inc., with an office located in Beverly Hills, California.