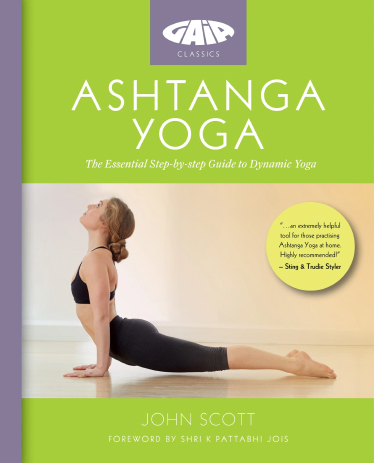 John Scott's Ashtanga Yoga is a step-by-step illustrated guide that takes you through the balanced exercise routines and breathing techniques of this dynamic form.

Carefully structured, this course starts with a simple sequence for beginners which, once mastered, provides the foundation for moving on to the next level.

This essential guide is the perfect introduction to yoga or the ideal gift for those who want to take their yoga practice to the next level.

Author John Scott studied with yogi Shri K Pattabhi Jois at the Ashtanga Yoga Research Institute in India, where he qualified to teach Ashtanga Yoga around the world. He has instructed many people in Ashtanga Yoga, including high-profile celebrities Madonna and Sting. John now spends much of his time teaching international workshops and undertaking teacher trainings.

Ashtanga Yoga is a science and a practice that has evolved over a period of thousands of years to deal with moral, physical, mental/ emotional and spiritual development. The term ashtanga, which means “eight limbs”, was devised in about 200 BC by the great Indian sage Pantanjali. He was the first yogi to systematize an approach to yoga, and his eight-limb system provided then, as it still does today, a set order of steps through which practitioners can progress in order to reach a state of yoga. In this context, “yoga” means the yoking, or union, of mind, body and soul, leading toward self-realization. In order to achieve this union, it is first necessary to take control of the mind and to remove the unnecessary stimuli and clutter that get in the way of clarity. Within the eight-limbed system of Ashtanga, the third limb is Asana. This is the practice of classical yoga postures, and it is the method that ties the mind to the body through the “thread of the breath”. In this system, the counted breath movement becomes the key to the focusing of the mind.

John Scott first became a student of Ashtanga yoga in 1989 when he took classes with world-renowned yogi Shri K. Pattabhi Jois in Mysore, India. An internationally known teacher, he conducts classes and workshops at his school in London.