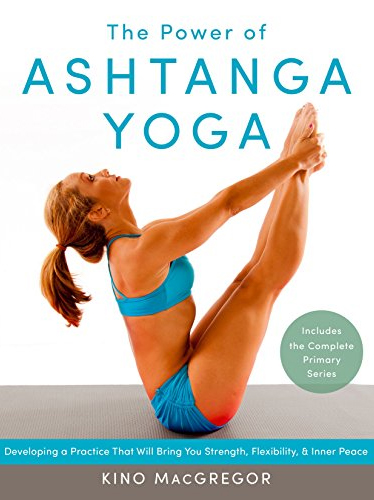 The Power of Ashtanga Yoga

About The Power of Ashtanga Yoga

A user's guide to the philosophy and practice of one of the most popular types of yoga—by the dynamic yoga teacher Kino MacGregor.

Ashtanga Yoga is a graceful, athletic type of yoga that has become extremely popular in recent years. Here, Kino MacGregor—a disciple of Sri K. Pattabhi Jois, the great modern guru who developed Ashtanga Yoga—gives a comprehensive view of the practice, demonstrating how Ashtanga is fundamentally a path of spiritual transformation and personal development.

MacGregor delves into the history and tradition of Ashtanga Yoga and reveals how its philosophy manifests in contemporary lifestyle and dietary choices. She also explains the essential connection of breath, posture, and gaze that is the core of the practice. Her clear, step-by-step instruction of the Ashtanga Yoga Primary Series—including standing, seated, backbending, twisting, hip-opening, and closing postures—is a wonderful initiation for those who are new to the practice, and it will motivate experienced yogis toward perfection of the form. Throughout, MacGregor shares her own personal yoga journey and her devotion to yoga as a path of self-realization in a way that will inspire all practitioners.

Like many Americans, I was introduced to yoga at a gym. When I was nineteen and more interested in fitness than spirituality, I noticed that some of my fellow aerobicizers attended the gym's yoga class; they had more defined arm muscles and were able to do headstands. This piqued my curiosity. Observing the class, I couldn’t make much sense of the stretching, breathing, and bending. Yet something within me was drawn to these somehow-familiar movements. So I decided to try.

Back then, I had no idea that there were different types of yoga, but I know now that the first class I took was from the Sivananda tradition. Focusing on gentle stretches, relaxation, and deep breathing, this class was calm, peaceful, and (to my young and restless mind) totally boring. So boring, in fact, that I never went back. But something about it had resonated with me, because when I injured both of my Achilles tendons about a month later, I turned to yoga to help me heal. I had no clue that I was about to reconnect with my inner self and begin a lifelong journey.

My injury was so debilitating that I had a hard time walking without the support of air casts. The sports medicine doctors I consulted recommended surgery. Instead I bought books on yoga from the Sivananda tradition and other Hatha Yoga schools, canceled my gym membership, and began the slow road to recovery that has taken more than a decade. This road became a pathway of discovery that involved far more than just physical health. The practice of yoga provided me with such profound emotional and spiritual healing that I have devoted my life to sharing this remarkable, transformative tradition.

Kino MacGregor is a Miami native who is happiest on the beach with a fresh coconut and a poet at heart who always stops to smell the flowers. She is the founder of Omstars—the world's first yoga TV network. With over 1 million followers on Instagram and over 600,000 subscribers on YouTube and Facebook, Kino's message of spiritual strength reaches people all over the world. Sought after as an expert in yoga worldwide, is an international yoga teacher, inspirational speaker, author of four books, producer of six Ashtanga Yoga DVDs, writer, vlogger, world traveler and co-founder of Miami Life Center.