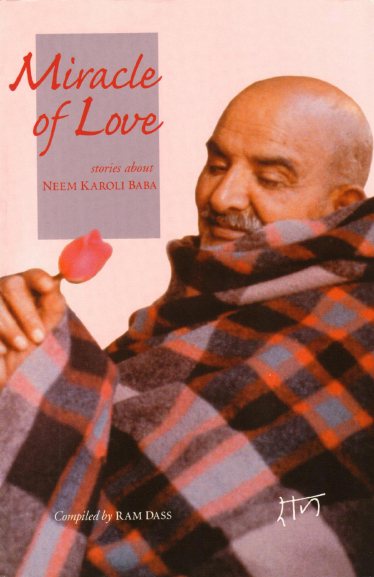 About Miracle of Love

"In 1967 I met Neem Karoli Baba, a meeting which changed the course of my life. In the depth of his compassion, wisdom, humor, power and love I found human possibility never before imagined...an extraordinary integration of spirit and form. I was with him only briefly for he left his body in 1973, still he entered my heart as living truth, and his presence continues to enrich and guide my life." -- Ram Dass

"There can be no biography of him. Facts are few, stories many. He seems to have been known by different names in many parts of India, appearing and disappearing through the years. His western devotees of recent years knew him as 'Neem Karoli Baba,' but mostly as 'Maharajii'--a nickname so commonplace in India that one can often hear a tea vendor addressed thus. Just as he said, he was 'Nobody.' He gave no discourses; the briefest, simplest stories were his teachings. Usually he sat or lay on a wooden bench wrapped in a plaid blanket while a few devotees sat around him. Visitors came and went; they were given food, a few words, a nod, a slap on the head or back, and they were sent away. There was gossip and laughter for he loved to joke. Orders for running the ashram were given, usually in a piercing yell across the compound. Sometimes he sat in silence, absorbed in another world to which we could not follow, but bliss and peace poured down on us. Who he was was no more than the experience of him, the nectar of his presence, the totality of his absence--enveloping us now like his plaid blanket." -- Anjani

The meaning of taking on karma is that a very high being, such as Maharajji, can work with subtle vibratory patterns and can take from devotees patterns with which they have been stuck for this lifetime or many lifetimes. For example, such a being could take away your sorrow or your ill fortune.

This process, which is a familiar one among Indian saints as well as sorcerers and medicine men from many parts of the world, can be done in a variety of ways. Often the medicine man works with a lock of hair or the feces or urine of the person suffering the effects of some negative forces, either inside or outside themselves. In India, such karmic healers often work with things the devotee gives them. Shirdi Sai Baba, a very great saint of India, would ask his devotees for annas, small coins worth less than a penny. These he would handle continuously until he had extracted the negative condition from the devotee into himself. This negative material he then could release from himself by other yogic processes. Another well-known guru in India asks his devotees for cigarettes and smokes from morning till night, year in, year out, often three or four cigarettes at a time. Maharajji's way was to eat the karma, and he seemed to have no limit to his capacity.

Ram Dass, formerly Dr. Richard Alpert, became a multigenerational spiritual teacher and cultural icon spanning from the 1960s through his peaceful passing at his home on December 22, 2019. His zeitgeist shifting book Be Here Now sparked a watershed of Eastern spiritual traditions and practices to become accessible to a Western audience. After a life-altering stroke, Ram Dass spent the remainder of his life on Maui, continuing to write books, share teachings, and hold retreats.