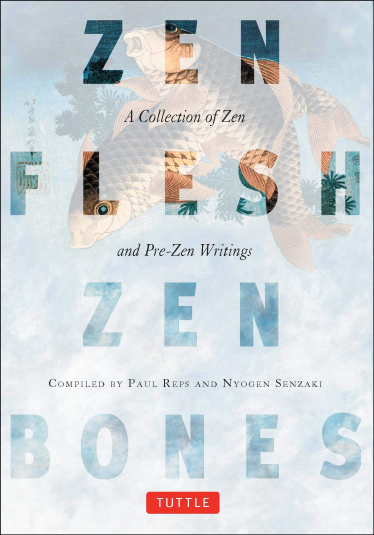 A Collection of Zen and Pre-Zen Writings

Zen Flesh, Zen Bones offers a collection of accessible, primary Zen sources so that readers can contemplate the meaning of Zen for themselves. Within the pages, readers will find:

When Zen Flesh, Zen Bones was published in 1957, it became an instant sensation with an entire generation of readers who were just beginning to experiment with Zen. Over the years it has inspired leading American Zen teachers, students, and practitioners. Its popularity is as high today as ever.

Zenkai, the son of a samurai, journeyed to Edo and there became the retainer of a high official. He fell in love with the official's wife and was discovered. In self-defense, he slew the official. Then he ran away with the wife.

Both of them later became thieves. But the woman was so greedy that Zenkai grew disgusted. Finally, leaving her, he journeyed far away to the province of Buzen, where he became a wandering mendicant.

To atone for his past, Zenkai resolved to accomplish some good deed in his lifetime. Knowing of a dangerous road over a cliff that had caused the death and injury of many persons he resolved to cut a tunnel through the mountains there.

Begging food in the daytime, Zenkai worked at night digging his tunnel.

Two years before the work was completed, the son of the official he had slain, who was a skillful swordsman found Zenkai out and came to kill him in revenge.

"I will give you my life willingly," said Zenkai. "Only let me finish this work. On the day it is completed then you may kill me."

So the son awaited the day. Several months passed and Zenkai kept on digging. The son grew tired of doing nothing and began to help with the digging. After he had helped for more than a year, he came to admire Zenkai's strong will and character.

At last the tunnel was completed and the people could use it and travel in safety.

"How can I cut off my own teacher's head?" asked the younger man with tears in his eyes.

Paul Reps (September 15, 1895 – July 12, 1990) was an American artist, poet, and author. He is best known for his unorthodox haiku-inspired poetry that was published from 1939 onwards. He is considered one of America's first haiku poets.