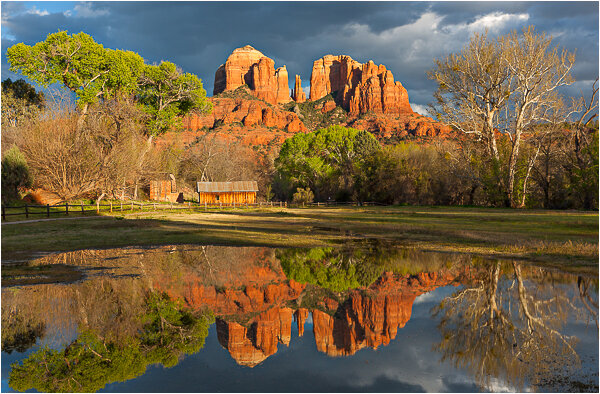 What is "The Sedona Effect", and why does it make Sedona a sacred land worth protecting? To understand this we first need to understand the vortex phenomena.

by Kevin A. Reid

This is my interpretation of the Sedona Effect based on my experience as a former science teacher, Sedona tour guide, yoga student, and self study student of quantum physics, and metaphysics.

For the many of you who are visiting Sedona I would like to explain to you the reason why this is a sacred land and should be respected regardless of your activities when visiting.

So, what is "The Sedona Effect", and why does it make Sedona a sacred land worth protecting? To understand this we first need to understand the vortex phenomena.

The vortexes, aka, vortices in Sedona are a consequence of the geophysics of the landscape in the region. Red Rock=Oxidized Iron=Iron=Electrical Conductor. Top dark layer=Basalt=Electrical Insulator. Iron/Conductor + Basalt/Insulator = BATTERY. The landscape has the properties of a geomagnetic battery

So.....where does the "charge" aka electricity come from? Well, Sedona lays on what is referred to as a "Ley Line”.

Remember from school that our planet has a molten nickel core which produces a global permeating magnetic field which protects us from solar radiation. This field expands through the surface at concentrated grid points aka ley lines. The ley lines charge the rocks. The planets magnetism essentially activates the electrons in the iron and thus produces a low grade battery effect, via the presence of basalt alongside the iron. Electricity and magnetism are intertwined. The magnetic field from the ley lines causes the electrons in the iron in the red rocks to spin/vibrate with a charge.

The motion and configuration of the electrons determines the "gender" of the vortex:

SEDONA IS A GEOMAGNETIC BATTERY THAT IS CONSISTENTLY FED A CHARGE BY OUR PLANETS CORE AND THE ENVIRONMENT ITSELF SUBTLY VIBRATES AT A HIGHER RATE THAN EVERYTHING OUTSIDE OF IT.

Well now then, why is this sacred and spiritual??

This vibration or charge is in essence "The Sedona Effect". So how does this Sedona Effect make Sedona so special??? This subtle vibration effects the reality around it:

The charge/vibration effects our nervous system which runs on mineral ions (Ca, Mag, K, Zn, etc). Our nervous system is directly connected to our brains. The vibration/charge in Sedona elevates our experience of life essentially. That is why we feel "different" or "other" in Sedona.

On a Quantum (microscopic) level this charge/vibration causes the 3D structure of matter to speed up thus causing an extra dimensional effect. This is why intuitive individuals such as empaths and healers flock to Sedona, they naturally have sensitive nervous systems and thus their intuition is elevated to a super human level in this environment. They can "see through to the other side" so to say as a result of this because their nerves are so stimulated as if they aren't in their flesh and bone bodies anymore.

Furthermore the RED (rocks) and GREEN (trees) and BLUE (sky) contrast produces a visual sensory effect that has interesting effects. All 3 colors are very different and separated from each other on the color scale.

For these reasons the Native Americans saw Sedona as a sacred land. Native American healing rituals were largely based on releasing trauma or negative thought patterns from THE NERVOUS SYSTEM. Chants, dances, plant medicine, etc, all effect the nervous system and brain to some extent or another.

THEY SAW SEDONA AS AN AMPLIFIER TO THIER PRACTICES AND RITUALS WHICH ALREADY TARGETED THE PSYCHE AKA BRAIN/NERVES OF THE INDIVIDUAL BEING HEALED.

This my friends is why SEDONA IS SACRED.

You can literally have a more elevated and aware experience of human existence simply by just being on this land.